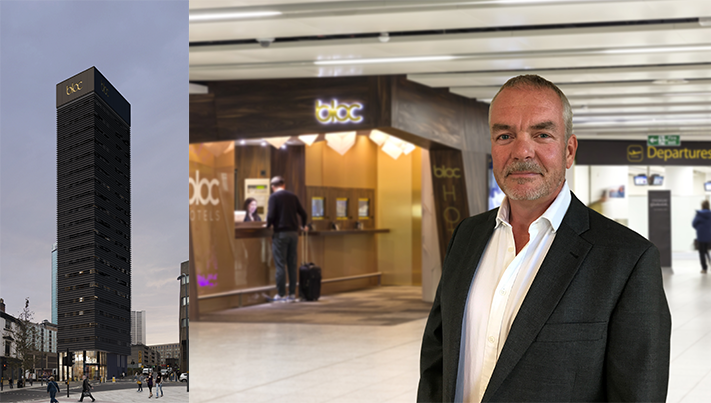 BLOC Hotels is delighted to announce the appointment of Dominic Mayes as its new Property Director. He brings to BLOC more than 18 years of experience in the acquisition of hotels, both within the UK and key gateway locations across Europe.

Construction of a new flagship BLOC Hotel is already underway at Grand Central in Birmingham and more properties are in the pipeline.

Dominic says: “I’m really excited by the challenge of sourcing and securing new sites for BLOC Hotels. BLOC is a brand that is ready for significant growth. I want to build on the success it has already enjoyed.

“Our primary target locations in the UK include London, Brighton, Bristol, Manchester, Edinburgh and Glasgow and we are particularly keen to secure additional sites on transport hubs, such as the existing hotel at Gatwick Airport.”

“We will also be looking at gateway locations in Europe, including Dublin, Paris, Amsterdam, Madrid, Barcelona and Milan.”

“Our preference is new build but we will also look at conversions and we will either buy and develop ourselves or take a lease from a third-party developer.”

Formerly Dominic was Property Director for Qbic Hotels and before that Head of Hotels and Proprietary Partner at Knight Frank.

Rob Morgan, Managing Director of BLOC Hotels, says: “We are delighted to have Dominic on board. We are confident that he will be the catalyst to help unlock our ambitious expansion plans.”

BLOC also launched its innovative Apartment BLOC suites in Birmingham in 2017. The innovative apart-rooms combine the convenience of a hotel with the creature comforts of your own home and are ideal for guests booking longer stays.

Work has already begun on the landmark 22-storey BLOC Grand Central hotel in the heart of Birmingham. Its high-tech design and fit-out will help realise the City Council’s vision of making the district around New Street Station a vibrant and attractive destination for visitors.

The area is at the centre of the Big City Plan – a 20-year project to create thousands of jobs and bring £2billion-a-year into Birmingham’s economy. BLOC’s designers, with innovation partners Samsung, have developed a high-tech, smart hotel that matches the aspirations of the area.