Italy is struggling with an aging population. Not only are people living longer, but in Italy, the birth rate is staggeringly low. In 2018, Italy’s birth rate hit a record low of just 440,000 births. But what does this mean for Italians, and how will it impact day-to-day life?

It’s important to understand Italy’s population situation before we move on to how this will affect Italians across the country. Let’s first take a look at Italy’s current population compared to neighbouring countries. We can also take a look at the current median age, as well as forecasted predictions. 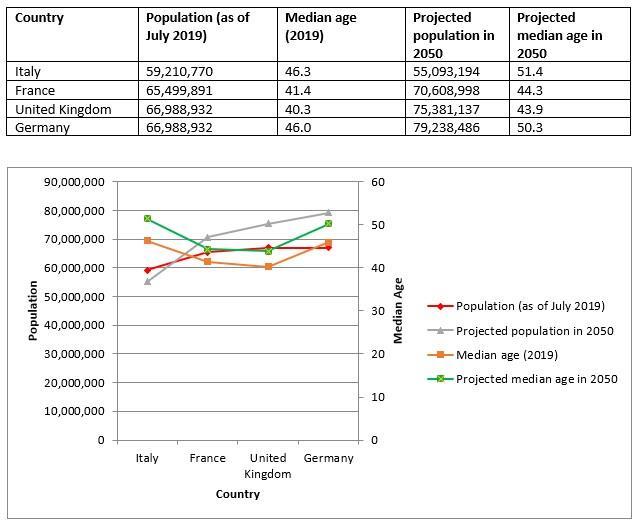 We can see from the above graph that, unlike France, the UK, and Germany, Italy’s population is actually set to fall between now and 2050. Alongside this, Italy’s median age rate will be higher than its neighbouring countries, with a median age of 51.4 predicted by 2050. Even Germany, with a population 24 million higher than Italy by 2050, is not expected to reach such a median age.

The situation is so dire that, without migration, Italy’s population will end the century 50 per cent lower than in 2000.

How it impacts Italy

One of the key areas in which Italy’s population crisis is taking its toll is with its stagnant economy. With more Italians leaving the country, less people moving into the country, and less births within the country, Italy’s workforce numbers are dwindling.

Along with this, a higher rate of older people within the shrinking population means more people will require healthcare, and that healthcare will need funding. This is where the effects will really trickle down to the average Italian.

Combatting an ageing population
Why is it that Italy seems to be struggling so much to bring new blood into the population? It’s certainly not because women don’t want children, says The Local. It’s that Italian women do not feel they can afford, nor be supported in having, children.

It’s a catch 22 situation for Italians. A shrinking population dominated by older people means less people in the overall workforce pool. The economy struggles, companies shut down, meaning less jobs. Youth unemployment is already at 33 per cent in Italy as youngsters struggle to find work, which in turn, encourages younger adults to look abroad for opportunities. This causes the population to further shrink, and the cycle goes around again.

But encouraging Italy’s women to become mothers isn’t an easy task either. As mentioned before, it’s not that they don’t want to — it’s that they don’t feel sufficiently supported to do so. Lack of childcare options, fear of losing their jobs, and lack of affordable housing all total up to make having a child less appealing and indeed, less feasible.

This leaves Italy with the problem at hand: an older population that needs looking after. With fewer Italians and more working-age Italians heading abroad for work, around 80 per cent of professional caregivers in Italy are from abroad themselves. But coming to Italy as a foreign national is certainly not easy; Italy rejected 24,800 asylum applications from the end of 2018 to the start of 2019, and the Salvini decree is feared to cause many more migrants to turn away from Italy.

Potentially, this could cumulate in a lacking healthcare support system for Italy’s rapidly ageing population. Not only will the country’s population be decreasing and ageing, it will not be able to provide adequate care to it.

One potential way to remedy the situation in the short term would be to redefine what ‘old’ is. In Finland, as another country dealing with similar concerns as Italy in regards to an ageing population, the debate is ongoing as to whether being 65 is really ‘old’ in this day and age. Some experts argue that true old age should now start at 80, with people in their sixties falling into ‘silver economy’ still able to contribute to the workplace and be active.