Why are some businesses more resistant to change than others and what can you do to stay relevant?

Home  »  Articles  »  Why are some businesses more resistant to change than others and what can you do to stay relevant?

Why are some businesses more resistant to change than others and what can you do to stay relevant? 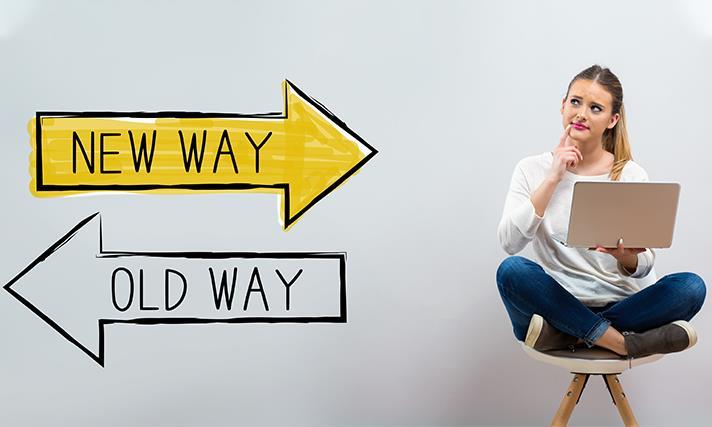 In the past we have seen the closure of many famous high-street brands following the recession and changes in consumer trends. But why did their competitors not fail too? Together with Impact International, experts in change management, we look at how some businesses make themselves resistant to change.

Woolworths and Wilko
Woolworths opened its doors in 1879 in New York and was renowned for selling products at a low price. When it came over to Liverpool, in 1909 consumers astounded at how much they could get for such a low price. Within 100 years, the corporation had nearly 500 stores in Britain. However, changes in retail occurred and supermarkets were developing so that they sold much more than just food – threatening the profits of Woolworths.

Their inventory was no longer unique and they sold lots of the same thing (40 types of pencil cases at one point). They eventually closed in 2008, and amongst an already high unemployment rate, Woolworths put 30,000 more people out of a job. But why didn’t similar company Wilko (Wilkinson) follow the same route?

Instead of falling short to the recession, the company capitalised off it by recognising people’s interest in DIY instead of paying a contractor and offering low prices. The second thing lies with their ability to recognise the need for a rebrand. In 2014, the company took steps to rebrand themselves from Wilkinson to Wilko and launched first-ever national TV ad campaign. They recognised the need for e-commerce and launched an online service alongside click and collect. As well as partnering with suitable, household brands they created their own label which has been a success.

Comet and Currys
Comet was another high street name that resulted . Once they’d gone out of business in 2012, their reasons for closure became clearer. They didn’t address the change in consumer’s behaviours – customers were starting to come in store to look and feel items and then going away to purchase online. There were also a lot of purchases of electrical items made straight from the retailer, such as Apple and Amazon, and this had negative effects on Comet. Instead of embracing the fact that they could offer better customer service than an online shopping experience, they let their customers walk away.

Opposing this story is Currys, owned by Dixons Carphone. Currys was founded in 1884 by Henry Curry, who his business began by stocking bicycles, toys, radios, and gramophones. After floating on the stock exchange, the company began to sell small and large electrical equipment. As with many electrical companies, Currys has faced heavy competition from the online availability of similar goods at a lower price. It has made some strong strategic partners to keep its head above water. Owned by Dixons Carphone (a merger between Dixons Retail and Carphone Warehouse Group), Currys and PC World stores were merged to become one superbrand. This allowed costs to be cut, in terms of fixed assets, and sales to continue.

Following the rise of internet usage, they established an e-commerce presence too. They created themselves a very smart supply chain through ‘dropshipping’. This is where Maplin listed products on their website that they weren’t in a warehouse – when a customer ordered a product, it was then ordered from Maplin’s suppliers and sent straight to the customer. The staff in their stores are well trained too, as a result of their successes they announced that their like-for-like sales were up 4.4% in the 6 weeks to December 24 in 2016.

BHS and Marks and Spencer
BHS announced its closure in 2016 following its 88-year presence in the UK. Similar to the other failed brands, this was down to its inability to remain on trend. Although it tried to incorporate some of its names from its Arcadia owner, they were never enough to keep people coming back. Although the company had a strong reputation for homeware in the 1980s, they tried to specialise in too many areas by including fashion and food in their stores. As a result, they didn’t sell anything that was unique to BHS as a brand or that was well-priced, so ultimately their customers shopped elsewhere.

Marks and Spencer have continued to stay on trend and monitor their consumers’ behaviour to inform their next steps. For example, in recent years many people are going to the shop after work to buy something to eat for that night instead of doing one big shop. In response to this, M &S announced that they would launch ‘food only’ stores which would act as small supermarkets for consumers. They also capitalised on the trend of quick and easy meals at home but added a twist of luxury to them with the Dine In campaigns. They constantly adapt their range to accommodate for different seasonal events too such as Mother’s Day and Valentine’s Day.

What should business owners do?
So, as a business owner, what can you do to avoid your business following the route of a failed high-street corporation? Here are a few tips:

– Rebrand when you think it is necessary – Although it may be a risk, if you are seeing losses it could be what might save your company. Many agencies are experienced in rebrands and attracting a whole new target market.

– Keeping on top of recent trends – It may seem obvious, but many business owners simply sit back and watch as consumer trends change, as they think their successful brand will remain the same. However, by monitoring what your consumers are doing, you can keep ahead of the game.

– Ensuring you have high-quality customer service – Although the internet can offer convenience, it cannot offer the customer service that your business might be able to provide. Make sure that customers can contact you with ease and you are specialised in your area.

– Sensible stock management – Make sure that you are stocking what you need and nothing more, if demand begins to fall you may be left with unsellable stock that will negatively affect your cash flow.

– Reassess your product line – Is it unique? If customers can purchase your products elsewhere for a lower price, it is highly likely that they will. Evaluate the profitability of your products regularly to ensure they are still able to generate revenue.

ToolsGroup and its Greek partner THellas announced today that Dixons South East Europe (SEE) has gone live with ToolsGroup SO99+ software to automate its omnichannel supply chain planning and transform from a supply-driven to demand-driven model. Dixons SEE is

Bengali has been officially named as the second most-spoken language in London, followed by Polish and Turkish - with around 165,311 London residents speaking one of the three as their first language.Yet less than one in 10 Brits (8%) can fluently speak a seco

The third national UK lockdown, starting January 2021, produced a wave of start-ups, with arts and crafts the most popular, according to a Direct Line business insurance analysis of new policy dataNearly a quarter of Brits (22 per cent) have either already sta

READ MORE
ArticlesJanuary 18, 2019Most of the world’s airports and leading destinations remain vulnerable to criminal or rogue mayhem

Christmas lovers searching for festive magic and beautiful markets this winter are being told exactly where to head. The holiday car rental experts at StressFreeCarRental.com have researched the world’s weird, wonderful, traditional, and themed Christmas ma

READ MORE
ArticlesAugust 18, 2021Many Businesses Yet To Grasp Significance of Brexit Divergence on Parallel Trading Laws

Lawyers Warn Time Is Running Out, As IP Exhaustion of Rights Consultation Closes On 31 August   Many UK businesses have yet to grasp the significance of Brexit divergence and its impact on parallel trading laws, which could materially affect the way they

There’s no doubt that the past 18 months have been challenging for all retailers and continue to be. Many well-established retailers have unfortunately gone out of business and our high streets are recovering very slowly.Small retailers have faced the bigges

READ MORE
ArticlesNovember 15, 2022More Than Half of UK EV Drivers Don’t Have Access to Charging at Work

52% of respondents say workplaces are yet to offer EV charging according to a recent survey of EV drivers, despite huge appetite from employees. More than 52% of surveyed EV drivers, or those considering buying an EV, do not have access to a charge point at th

An innovative, AI-powered smart lamp which detects and prevents falls in older adults is now available in the UK & Ireland. A lamp, designed by Nobi, a European provider of innovative technologies in elderly care, launches this week in the UK and Ireland.